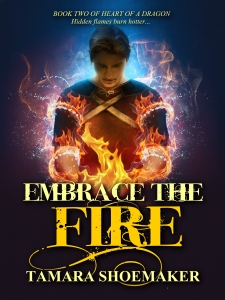 Wanted by King Sebastian, Kinna, the long-hidden daughter of the assassinated King Liam, flees for her life, determined to seek out her twin brother and free him from Sebastian’s dungeons. Meanwhile, the King holds Kinna’s adopted father as collateral to ensure she keeps her betrothal to a man she does not love.

Once cursed by King Sebastian to turn everything he touched to ash, Ayden suffers from new, searing pain that heats his flesh in a different way. Searching for answers, he digs into the histories of West Ashwynd’s Clans, and his discoveries lead him to the Amulet he’d thought had rid him of his curse. When he finds a rare Mirage Dragon, hope for vengeance upon Sebastian fills him again.

Captured and stripped of his power as Dragon-Master, Cedric resists using his Dragon-speak to advance Sebastian’s political aims. When he escapes the King’s clutches, he resolves to find his twin sister, Kinna. But the enemy has a long reach, and Cedric’s chains are unrelenting.

Ice and agony torment Sebastian, King of West Ashwynd. His fury rages unabated as he prepares for war. When treachery leeches into his ranks, he turns against everyone he trusts. Sebastian believes he cannot be outwitted but…

Kingdoms rise and fall; wars transform nations—but who can survive the fires of Dragons?

Subscribe now for updates on new releases and book deals!