I was entrenched in the life of a mystery writer when the seed of an idea for a young adult fantasy speared me with all its scintillating glitteriness, and I couldn’t help myself. I leaped from the safe platform of the genre with which I was familiar and landed in the murky waters of a genre in which I had no clue what I was doing.

At the time, there was no way of knowing the journey the book would take. When I finished it, I was vaguely dissatisfied. I’d poured my soul into that book–my love of the YA fantasy genre is deep and real, and I felt that the book fell a little short of what I wanted it to be. However, I couldn’t put my finger on it, so I sent it off to my publisher, who agreed that there was some work that needed to be done, so I took it back for another round.

I finally polished enough to try for a larger traditional publisher. So I put the manuscript aside, and drafted query letters. Synopses. Outlines. Bios. Whatever agents wanted, I wrote. I sent queries and sent queries and sent queries. 175 queries and nearly nine months later, I had gotten one request for a partial paper manuscript, and when I went to the post office to mail it, my post-office-demolition-expert children distracted me so greatly, I mailed an empty envelope to the agent.

Obviously, they didn’t request a full manuscript after that ordeal.

I attended a Writer’s Digest conference in New York City last fall where I had the chance to pitch my book to as many agents as I could within an hours’ time. Querying had been spectacularly unsuccessful–I couldn’t imagine that the conference would garner anything more, but I was willing to try. I went, met seven agents, and got six requests for partials of my manuscript.

I was so excited! I came home and immediately sent it off. From those six, I heard back from three, two with detailed explanations of how they loved the story, but felt that they had accepted something similar to it recently, and one that wanted the full manuscript.

I sent the entire manuscript to the agent and settled in to wait. While I waited, I wrote another book, Kindle the Flame (released in June of this last year), and in the months that passed as the agent considered my manuscript (it usually takes about six months), I experienced a massive transition in my worldview regarding publishing.

But the market has turned on its head in the last few years. Self-publishing (while still including those who write a story and toss it up for sale without proofreading or editing) now includes names from NYTimes bestselling authors as well. Self-publishing has morphed into a respectable publishing option.

As all the facts, figures, and fancies flooded my head during that six month time period as I waited for the agent to respond to my manuscript, I decided that I didn’t want to go the traditional route. Not with this book.

So, at long, long last, I decided to put the book out under my own name. I sent the book to a fabulous editor, who figured out the intrinsic weaknesses that I never could shake, helped me peel my story apart and put it back together again in a much stronger fashion, and am now finishing up the final edits on it.

MARK OF FOUR releases on NOVEMBER 30, 2015!!! Three months from now! I sincerely hope you’ll take a chance on this book. It’s the first in a trilogy (that’s already written), and will resonate with people of all ages, I think, even if it is geared for the young adult market.

Now I’ve got to show you the brand spankin’ new cover for it! I am beyond excited about it. It’s beautiful, and I absolutely love it. Below that, I’ll post a description of the book so you can start getting as excited as I am.

Hahaha! Or a fraction of how excited I am. 😉 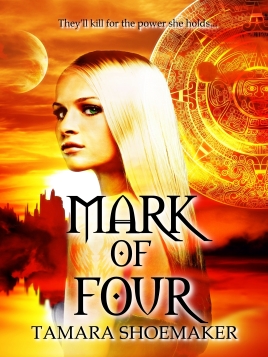 SEVENTEEN-YEAR-OLD ALAYNE WORTH is an Elemental Water-Wielder. All she wants is to master her talent and live a normal life, but the sudden escape of a feared criminal leaves her family reeling and threatens to keep her from achieving her dreams, especially when the criminal’s reach pushes too close to home.

Secret pasts, strange powers, and tense relationships weave a tangled net around her. As she leaves home to cultivate her skills at an Elemental training center, she clashes with a disturbing reality: both good and evil forces covet Alayne’s unusual gifts, and each side is willing to do almost anything to obtain them. As Alayne confronts the battle for the power she possesses, she must discover the truth of who she is.