I’ve been excited for a long time to host Emily June Street on my blog. I’ve lived in a perpetual state of amazement for her as editor, flash fiction contributor, reviewer, book formatting genius, and now author. I’ve had the privilege to read two of her books (Velo Races and The Gantean) so far, and the way she condenses heavy story into few words rivets my attention. I love her works, y’all, and I think you probably will, too, if you’re at all a fan of fantasy. 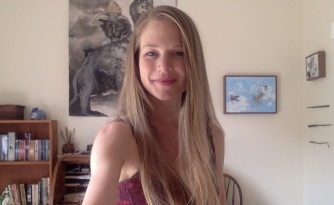 (What a fun office, and… a wand collection?!?! I’m insanely jealous)

1.) In three sentences, tell me what The Gantean is about.

After being kidnapped from her stark existence on the cold island of Gante, Leila must learn to survive in a southern culture her native people disparage. In this lush, intricate society, exotic temptations greet her at every turn, including a dangerous love affair with a man she never should have known. When civil war threatens, Leila is forced to choose between southern love and northern rituals.

2.) What inspired you to write The Gantean? How many drafts of this story have you written to get it to what it is now?

I started the book when I was twelve. I was originally inspired by Mary Stewart’s series about Merlin. I was particularly taken with the character of Mordred, and I wanted a girl version. That’s how the character of Leila began.

I don’t count drafts. I’d give up if I did that. I do have my original handwritten drafts from 1990. (Opening line: “All her life, Leila had heard stories about the great sea goddess, The Sedna, who roamed the Forbidden Cove.”)

In college I started over again, but I think those drafts are lost now. About seven years ago I started the version that now exists, much changed. I have probably done close to a hundred revisions on this version. It’s been a difficult book.

3.) Tolkien was renowned for creating an entire Elvish language in Lord of the Rings, and you’ve created words and phrases of your own in The Gantean. How complete is the language? How did you come up with it? Can you describe some of the process of creating the words you did?

Someone asked George RR Martin a similar question about making up new languages in fantasy, and I recall the jist of his answer, though not the exact words: the only new language he invents is the new language he needs. I took that to heart. I don’t want to spend my time inventing grammar. I focus on relevant words.

I turned to the Inuit and Inupiat languages for inspiration. I liked their guttural, hard sounds, plus I was already doing research on those cultures to learn about living in cold environments. I tried to familiarize myself with their syllables, and then I selected ones that would be my core Gantean sounds (such as iks-, -uq, -aq, and –ian) Occasionally I used actual words, when I really loved them. For instance, my character Pamiuq’s name is from an actual Inupiat name that means “seal or animal tail,” and The Cedna’s name is a slight variation on the mythological being, Sedna, who is very loosely incorporated into my Gantean cosmology.

4.) If you were thrust into the world you’ve created, how much sympathy would you have for the characters you created? Would you find yourself more on the Iksraqtaq side, raw, pure, and tough, or the Sayantaq side, full of emotional influences? Why?

I’m more sympathetic to some characters than others, partly because I know their backstories—not all of which are presented in The Gantean, the first book of—urg—seven. I feel sympathy for my lead, Leila. She’s always been the centerpiece of the book, but I put her into so many tough situations, and she’s so torn between duty and desire. But her watery personality is nothing like mine. I’m intense and I’m very decisive. I don’t identify with the water element, literally or figuratively. I’m like a cat; I don’t like to get my ears wet. Also, most water is cold and I hate that.

My natural temperament is more Gantean. I’m an INTJ—stoic, introverted, uncomfortable with showing emotions, preferring rational detachment. Like Ganteans, I have rigorous standards. Even so, I can’t fully sympathize with the Ganteans. They’ve made some poor choices. Also I’m extremely independent. I wouldn’t be happy in their deeply communal culture. I’d want to have the freedom of belief and expression that the sayantaqs have. Besides, I could never survive on Gante. I can barely handle winter in California.

On the sayantaq/southern side, I can’t sympathize with their artifice and deception. They’re too self-absorbed; they’re too privileged. I guess what I’m trying to say is that my own temperament is a blend of the two extremes. I’m moderate.

5.) Tell us two things about yourself that few people would know.

One, I wanted very badly to be a ballet dancer when I was growing up. It didn’t work out. Two, I hate driving. I cannot spend more than 30 minutes in a car. It gives me a migraine, so I mostly bike for transportation.

Well, I try very hard not to have my books be way over 100,000 words. The Gantean, believe it or not, is only 105,000 including front and back matter. That said, I’m aware that it reads like a longer book. You cannot imagine the amount of editing I did to achieve this. It went from a 250,000-word manuscript with essentially the same amount of story—with a few sidetracks that got cut—to what it is now. It’s dense.

Flash fiction can be finished in a matter of hours. Books take me years, but I’m more comfortable with a book’s space to maneuver. Flash fiction is hard for me—the time constraint, the word count. I feel confined by it.

My mission for flash this year has been to write historical flash or stories set in cultures other than my own, and that additional parameter makes it even more difficult. I decided to focus on historical settings and other cultures because so often in flash we use expectable commonalities in our (largely Western) experiences to do the work of setting and character; I wanted to take that away from myself and see what I could do. So, um, yeah, still working on making that work.

I also think the two forms—flash and novels—ask for different writing styles. My natural style is honed for novels. Hopefully it’s clear and simple. If you use a simple style in flash fiction, you’d better have a really good story idea, one with impact or a twist. If the story is quieter, you generally have to turn to more poetic language for the flash-pizzazz. Poetic language is not my forté. When I write poetically, it always sounds like a sentence full of purple darlings; I usually have to cut it. You don’t want to have sentence after sentence of poetics in a novel. It’s too much. You need to focus on clearly telling the story, keeping it moving. In flash you can be more poetic because it’s so short, and often the story doesn’t have to be entirely uncovered. You can leave more to the reader’s inference.

7.) And finally, if you were set adrift on an ocean in a rowboat with only a compass, a cooler of water, and several bags of trail mix, what five literary characters from any genre throughout history would you most want to take with you, and why?

First off, thanks for the water and the trail mix! That makes it easy to pick Ender Wiggin as my first companion. Ender might not be that useful in the short term survival game, but if I have some supplies, I know his strategic mind will be a great asset in the long game. Plus, I’m sure he could navigate us to the nearest hospitable island using triangulation and a toothpick or something.

I’d like to have Paul Atreides from Dune. He’s a resourceful man who knows about water deprivation, and he has rare abilities, like perfect prescience and weapons training and chemical body control. He could possibly transform salt water into something drinkable when the water in the cooler runs out.

Anyanwu from Wild Seed, with her shape-changing abilities and her near-immortality, could go down and get the dolphins to assist us, if we could convince her it was worth her while to save the rest of us. She’s also very self-sufficient and versed in low-tech survival.

Hermione Granger has a cool head—most of the time—and she’s skilled at magic. She’s modest and willing to play a supporting role. My boat doesn’t have much room for egos with those first three on board. Hermione might even have a time-turner stashed away in her magical purse, which would help us go back in time and make a better decision so we wouldn’t be stuck on this rickety boat.

And finally, I’d need to have Miki from The Gantean. He grew up in a culture that hunted on the sea in low-tech conditions, so he knows how to survive with scant resources on the water. He’s tough, he’s not a complainer, and he’d feel responsible for helping the rest of us, because of all that communal Gantean indoctrination. He also has a magical wayfinding ability that might get us back to a familiar location. If he works with Ender, we should be home in no time, with trail mix to spare.

Now is the time to hurry on over to Amazon and grab The Gantean for your very own. Huzzah! 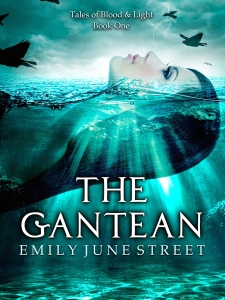 After being kidnapped from her stark existence on the cold island of Gante, Leila must learn to survive in a southern culture her native people disparage. She has no choice but to follow the creed of her clan, flow like water, and adapt to a foreign new world. In this lush, intricate society, exotic temptations greet her at every turn, including a dangerous love affair with a man she never should have known. When civil war threatens, Leila is forced to choose between southern love and northern rituals.

But at what cost?

Her choice may have consequences even she cannot predict.

Emily June Street is a true Gemini: she teaches people Pilates by day and edits, writes, and formats by night (and very early morning). She is the author of three novels, The Gantean, Velo Races, and Secret Room, and her short stories have appeared in numerous publications. She likes to pretend she’s a superhero on her bike, and she has a collection of magic wands. She lives in California with her husband and her shoebox puppy, Stella.

Learn more about her writing and freelance editing, formatting, and self-publishing coaching at: https://emilyjunestreet.wordpress.com/ or https://luminouscreaturespress.com/

2 thoughts on “Author Interview: Emily June Street about The Gantean”