Perhaps you’d know him by his other name: Gilbert Blythe. He was the face of the well-known love interest for Anne of Green Gables.

For those of you who don’t know me personally, you should know that I dwell in a half-delusional state where I think I am Anne Shirley. I rename things with boring titles, and while I’ve never had a White Way of Delight or a Lake of Shining Waters, I’ve had a Feline of the Smoky Hue and a Coffee Most Taste-bud Worthy.

I talk incessantly, even if it is an inner monologue, and I dislike carrots. Especially cooked. The delight of my life when I was a child was the story club I formed with my friends (true story!).

So, you must see the similarities. 😉

I mean, it’s not like Gilbert Blythe died, right? So this heart-broken Cordelia-in-my-dreams-but-Anne-if-I-have-to-be-but-only-with-an-e has no reason to sob out my woes into Marilla Cuthbert’s spotless white linen pillow cases. 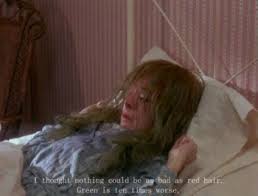 Here’s the thing: even though an actor only plays a part and gets their paycheck (all in a day’s work), they do, for so many people, become that person. It’s the beauty of the silver screen. When Lucy Maud Montgomery brought Gilbert Blythe to life in the pages of her books, she most likely did not give him the exact contours of Jonathan Crombie’s face, but because he took up the role, he became Gilbert to many, many people, myself included.

If, in the highly unlikely event, that I ever gain the distinction of having an actor play the part of one of my book heroes, I hope the person is able to carry on the legacy of that character with as much class as Jonathan Crombie did for Gilbert. Not that he was the best actor in the world, not that he would have won an Oscar or a Golden Globe. He simply brought to life an iconic character in any girl’s life: the boy-next-door.

Gilbert Blythe will always live on in my imagination. He will always remain one of my favorite leading men (right up there next to Mr. Darcy, thanks, Colin Firth), and I will revisit the pages of AoGG again and again throughout the rest of my life. But I’m still sad that the person who breathed life into Gilbert’s on-screen persona has passed on.